Rod Bright & Associates Pty Ltd incorporated the Colac office of Meudell, Gillespie & Co, and changed its name to the current title in 1983.

A snapshot history of surveying and land development in Victoria is represented in the trails of the firm’s work and it’s surveyors.

Lt. Col. James G Gillespie M.B.E., L.S., Hon. F.I.S. Aust, F.R.I.C.S. (1884 – 1987) is renowned in the history of surveying in Australia. “Jim was an outstanding professional surveyor and successful businessman. His lifelong services to the community and technical achievements have reflected credit on the profession in Australia. In brief, Jim served in two World Wars (Survey Corps), was instrumental in federating the professional surveying bodies across Australia and vigorously promoted the academic training of young surveyors as a member of the RMIT Council (of which he later became a Life Governor). Jim was also particularly dedicated to hospitals and charities, being an active member of numerous building committees and advisory councils of hospitals, aged-care facilities and the like.” Traverse, Institute Surveyors News Bulletin, no 232, April 2006.

Gillespie’s business partner, Mr Allan M Meudell, among other achievements, notably assisted the Chaffey Brothers in Mildura to establish their visionary irrigation system in the town. We understand Meudell bought the surveying business from Frank Doolan. Doolan is noted for his contribution as the surveyor for the Shrine of Remembrance, and his role in calculating and positioning the aperture in the ceiling of the Sanctuary at the Shrine, which allows the ray of natural sunlight to fall on to the engraved word ‘love’ at precisely 11.00am on 11 November each year. 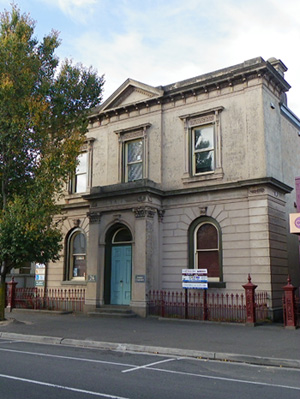 
The connection of Meudell & Gillespie Co to Rod Bright & Assoc. is made by Rod himself, and is explained by Rod’s career path. After completion of his Diploma in Surveying at RMIT and a cadetship with the government body – Division of National Mapping, Rod went into private practice with Frank O’Halloran and Associates.

Frank O’Halloran & Associates had the contract for the Mainline Building Company and Rod spent five years undertaking survey work to establish the footings of the significant buildings being constructed around Melbourne at the time, including Collins Place, which was the highest building in the city when completed after 10 years of construction in 1981. Rod obtained his surveyors licence during this time, and when Frank O’Halloran acquired Meudell , Gillespie & Co, which had until that time been owned by Percival A Jordan, Rod was promoted to manage the business.

Rod Bright himself bought the company in 1976, in partnership with Percival Jordan’s son, Phillip McCloud Jordan. Initially the Colac office generated enough work only for a part time survey party. Rod built up the business until 1983, when he moved his wife, Margaret, and young children Anthony, Michael and Sylvia to the district to permanently live and work. (The last job before moving was a re-establishment survey at Luna Park after a fire in 1981, which destroyed part of the park.) Phillip Jordan left the business at this time. Rod sold the Meudell, Gillespie & Co business and established Rod Bright & Associates. (The Meudell, Gillespie & Co survey history continues with the firm operating in Carlton today).

Now Anthony Bright continues the surveying tradition in the Bright family, with Katy Bright providing support with a town planning background. The company continues to grow, and has evolved to embrace the benefits of the IT age.